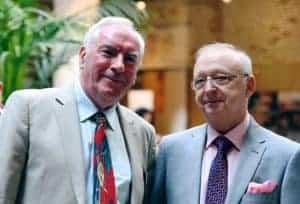 Last week, we had the honour of attending the much-anticipated international conference which presented scientific research on the role Quantum Physics plays in the life of the planet, its impact on health and how it supports the underlying science of Homoeopathy.

Nobel Laureate Professor Luc Montagnier is well known for his research in chronic diseases and the role of viruses. He spoke of the consequences of environmental pollutants, such as pesticides, and the potential link between toxicity and the growing levels of adverse health conditions such as Autism and Lyme.

Professor Brian Josephson, Nobel Laureate from the University of Cambridge, discussed water structures and how water behaves in given circumstances, underlining its suitability and potential contribution to health.

Professor Gerald Pollack, Executive Director of the Institute for Venture Science in the US, discussed beautifully the nature and structure of water, the manner of how water reacts to actions, forming what he calls an ‘exclusion zone’ between surface and body as measured under laboratory conditions.

Russian Professor Vladimir Voeikov talked about how structured water plays a key role in vital processes and how the dilution and succussion plays significant roles in the actions of water.

Dr Robert Verkerk, Alliance of Natural Health, presented a thought-provoking piece on sustainable healthcare and the role CAM can play in a changing paradigm of healthcare which places emphasis on wellness outcomes rather than placing total reliance on pre-released clinical trials.

Dr Menachem Oberbaum, Director for the Centre of Integrated Complementary Medicine, Jerusalem, informed delegates of homoeopathic research in his country, with clinical evaluations measuring patient outcomes from both CAM therapies and conventional treatments.

Dr Raj Kumar Manchanda, Director General of the Central Council for Research into Homoeopathy in India, spoke at great length on the developing role Homoeopathy plays in the health service in his country. CAM therapies now have an entirely separate regulatory and administrative system within their national health service.

Lord Ward-Atherton brought together an outstanding group of researchers who have worked for many years and accumulated an extensive database of research data. The community is indebted to him for his vision, belief and leadership in bringing together this meeting of great minds.